I have a big birthday approaching quickly. I'll be turning 30! I'm not dreading it. In fact, I'm totally fine with it. When I turn 40, it might be a different story.
Any way...Mike asked me what I'd like to do for this special event. I don't want a big party. That I know for sure. I did decide that I want to travel somewhere for my birthday gift. I'm quite realistic and know that we can't afford to fly to Mexico or California for a quick weekend get-away so I started looking at locations that we could drive to.
I've heard fabulous things about Door County Wisconsin. Here's where I need your help. If you've been there, please let me know where we should stay and what are a few things that we should do while there. We'll be going this fall sometime if that helps with suggestions.
Thanks in advance!
Posted by A Day In The Life.... at 7/27/2008 4 comments:

When we were up north this weekend, Mike made the comment to me that I hadn't really taken him anywhere "cool" since we started coming up to SB 8 or so years ago. So I took him to Palisade Head and to Tettegouche State Park. I managed to accomplish two things by doing this. One being taking my husband "somewhere cool" and the second being crossing #30 off my 101 in 1001 list.
Here he is at Two-Step. For some reason, I don't remember it looking like this at all. We use to swim here all the time. Well, maybe you can't call jumping off the cliffs swimming, but you know what I mean. I guess it has been over 10 years since I've laid eyes on the place though. 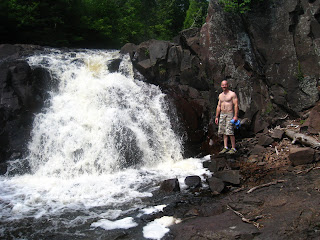 Here we are at the High Falls. Whew. That 1.5 mile hike up here felt much more like 5. Well worth it though! 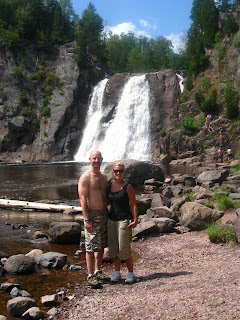 I had this past week off of work. It. was. awesome. Daycare also had the week off so the boys and I spent some quality time playing around. We hit up Como Zoo on Monday. We spent a lot of time hanging out by the Gorillas! 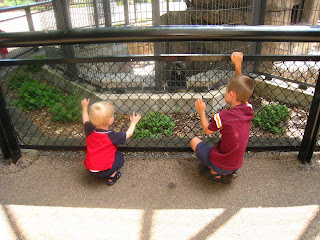 On Thursday morning we loaded up the car and went to see Grandma Sue and Grandpa Mike up north. Lots of time spent outside enjoying Bay Days and eating dozens of "coooookies." 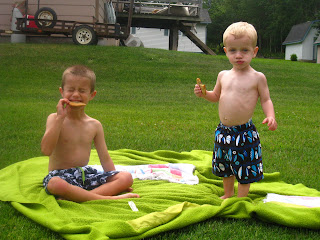 They had some kid games on Saturday morning. Colton was all over it. He found $5.00 in 50 cent pieces in this lovely hay stack. 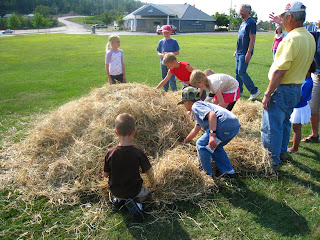 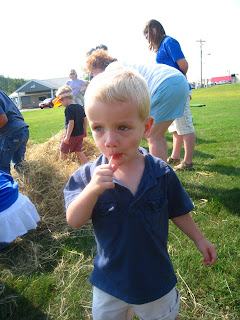 This little guy wasn't into the games....he was too busy enjoying his candy.
Not to brag, but Colton and I came in first in the kid/parent three legged race. Oh yeah, you read that right. I figured I'd just take it nice and slow so we wouldn't wipe out. Five seconds into the race, Colton starts yelling at me to "run faster." So I did. And we won.
Posted by A Day In The Life.... at 7/27/2008 2 comments:

The other day Colton and I were in his bedroom playing with his dinosaurs. I have no idea how we got on this topic, but here was our conversation:

We've been keeping very busy these past few weeks. Here's a little photo recap of what we've been up to. 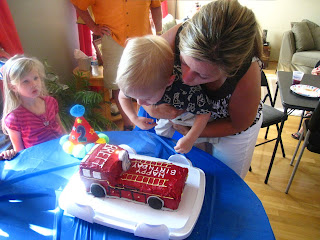 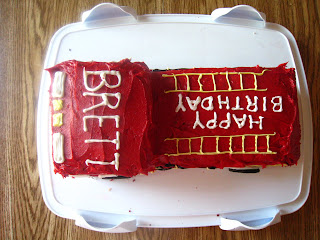 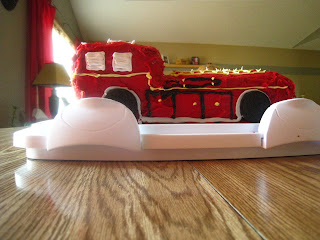 Getting birthday kisses from Bree. 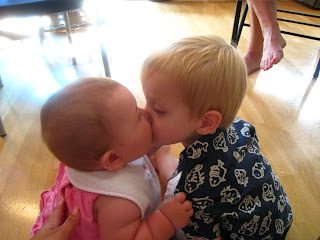 Note to parents.....if you can avoid using red frosting, I highly recommend it..... 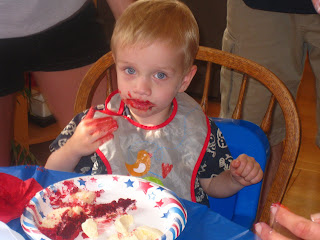 Trying new tricks on the bike over the 4th. 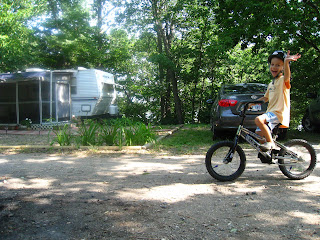 Eating corn on the cob. Seriously, is it really a 4th of July weekend without this tasty food? 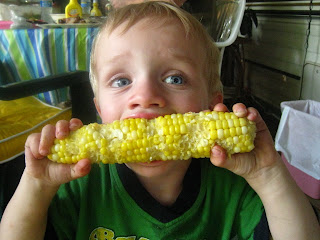 The boys in their Red White and Blue. 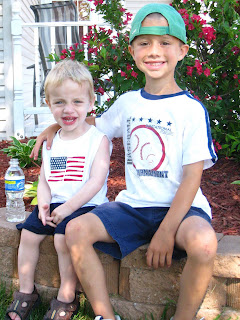 There's no keeping clean up at the lake.... 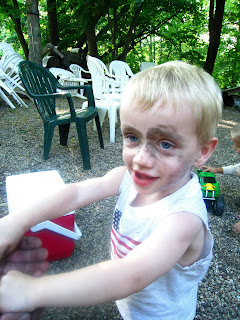 We're also in week two of swimming lessons for Colton. I'm so impressed with how far he's come in the last year. He just loves it even though is little lips are purple when he gets out of the pool.
On a totally different note, I may have made a really expensive mistake. I just happened to spill magenta finger nail polish on our light tan carpet. Anybody have any miracle cleaning tips? I've tried polish remover as well as a bleach/water mixture to no avail. I'm hoping to avoid a trip to pick out new carpet, but it's looking like that just might be in my near future.

The Precious Moments of Parenting......

Yesterday I stumbled upon some really good tickets to the Twins game, so I gave them to Mike and Colton. They had a great time.
When they first got there, a man and his kid were sitting next to them and the guy looked at Colton and handed him a baseball. Apparently, they were there during batting practice and happened to get one of the balls that were hit up into the stands.
Then as he was enjoying his huge ice cream sundae in a Twins hat, a guy accidentally spilled his beer and got some on Colton. He felt horrible and offered to buy him a new sundae as a few drops happened landed in his ice cream. Mike told him not to worry about it, it was an accident (truly it was - it wasn't as though he was hammered and poured it on him). A few innings later the guy came back with a bag of cotton candy for Colton.
Then on the way home, the following conversation took place:

Colton: Dad, why did that guy and his kid give me that ball?
Mike: Well, he said that they already had one. Remember what mom and I tell you about sharing or giving things to other people? It makes you feel good to make somebody else feel good.
long pause....
Colton: I feel bad for people that don't have anything. (this said as they were driving past a few homeless people holding up signs).
long pause......
Colton: Dad, I can't wait to have kids so that I can teach them what you just taught me. And I can tell them about what we do. Oh, and I'll teach them about Kirby Puckett and Herbek too.
Posted by A Day In The Life.... at 7/02/2008 7 comments: